One traditional suggestion writers hear is, “Write what you know.” And that’s where Margaret Mizushima started. 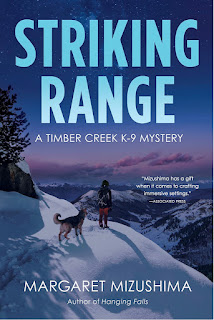 She lives on a small ranch in Colorado, has been married to her veterinarian husband almost forty years. When she decided to write a series, which became the Timber Creek K-9 mysteries, “I knew that one of the characters needed to be a vet. In real life, however, vets may solve medical mysteries, but rarely (or perhaps I should say almost never) are they involved in murder mysteries.  I decided that a veterinarian and a K-9 handler could make an interesting crime fighting duo—trio if you count the dog, and dogs should always be counted.”

Deputy Mattie Cobb, her German shepherd partner Robo, and veterinarian Cole Walker have now been involved in seven police procedurals in the Colorado high country, the latest being Striking Range.

It opens with two exciting chapters. Mattie and San Diego cold case detective Jim Hauck visit a Colorado prison to interview the man who tried to kill Mattie in an earlier book and who may have killed her father thirty years earlier. When Mattie and Jim Hauck reach the Colorado state prison where they will finally get to interview him, he’s found freshly dead in his cell. There’s one clue: a map leading to Timber Creek and rugged Redstone Ridge. Mattie and Hauck photograph the map with their cell phones.

(Quibbles: What kind of prison needs an interview room with an adjoining viewing room and recording equipment? Would staff be locked inside the room during a prison lockdown? From the outside, yes, with instructions to stay put; but locked inside, no. Finally, no one—not a CO, lawyer, detective, visitor—brings a cell phone into prison. But perhaps they do things differently in Colorado and these pettifogging notes do not diminish the book's enjoyment.)

While Mattie is visiting prison, Cole is delivering a litter of pups Robo has just sired. The description of the canine c-section is as exciting as anything in the book.

Left to explore the map’s clue without him, Mattie, Robo, Hauck, and a local rancher journey into the burned forest surrounding Redstone Ridge. But before they can finish their search, however, they’re called to help investigate the death of a young woman found in a campground filled with elk hunters. Identification of the deceased points to her having recently given birth, but the infant is nowhere to be found.

As a deadly storm descends upon the mountains, covering everything with a layer of ice and snow, Mattie and her team search for the missing newborn. The storm batters the area, taking its toll on the team and forcing the sheriff to call in reinforcements. When new evidence surfaces that this is not the only baby to vanish under suspicious circumstances, they decide that finding the woman’s killer will lead them to her baby, making them even more desperate to solve the case.

Then Cole goes missing, stranded alone in the high country with a person that Mattie now suspects is the mastermind behind several murders, including her father’s. She and Robo take to the trail to find Cole–but the killer has a cold-blooded plan that threatens them all.

Among the book’s many pleasures:

—Robo. He’s a character. He may not be much of a conversationalist, but he communicates clearly.

—The landscape. Mizushima’s descriptions of the high country and small-town life make me want to go there.

—The dogs and their handlers. Robo eventually is not alone, but is joined by K-9 dogs trained to search for drugs, or cadavers, or explosives.

—The relationship between Mattie and Cole and the other characters. Mattie respects and is respected by her boss, the Sheriff, and she works well with a detective who, unlike Mattie, is not native to Timber Creek.

—Finally, Mizushima creatively avoids the cliché of the villain threatening to kill the female cop in the last few pages of the book.

You do not have to have read the earlier Timber Creek K-9 mysteries to enjoy Striking Range, however it will improve your pleasure if you do read Burning Ridge first. (I reviewed it here.) In fact, the series is entertaining enough, you might start with Killing Trail to see how Mizushima has been able to build and sustain this world and the people in it.

Wally Wood
I'm a professional writer and editor. I hold an M.A. in creative writing from City University of New York and a B.A. in philosophy from School of General Studies, Columbia University. On Twitter @wewwoodwriter. I'm a long-time volunteer in local prisons and I teach creative writing in the local library. I am a certified SCORE Business Advisor, advising clients who want to start a business. In addition, I'm especially interested in Japan, Italy, and their languages.

This site uses Google's blogger technology. Be aware that Google uses cookies to analyze traffic to this blog. If you submit a comment that is posted it will be publicly visible to all. If you contact me via my blog I'll use your e-mail only to respond to your inquiries. If you click on any links on this blog to outside sites, please review their policies and content. By using this site you agree to and accept these terms of use.